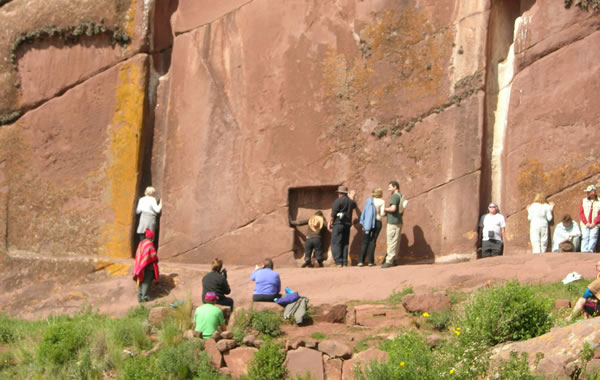 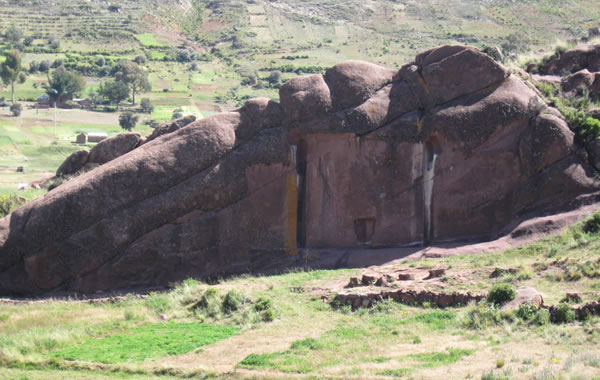 Chucuito is located 18 Kms. A (20 min) of Puno, where a construction of the Inca age, with large blocks of polished stone plinth on the outside. Inside shows another smaller wall carved stones , is the Inca Uyo . On it you have several explanations. This enclosure 20.10 by 10.36 meters has access aimed at 35 degrees to the northeast, which is the direction of the winds of Lake.

It has been observed that the outer edge of the access and the interior opposite edge has a line down the east- west and north- south. These lines coincide with the inner corners of the enclosure, which suggests that the building is designed to be used as geodetic – astronomical observatory and to define moments for agricultural activities.

In a route of about 18 kms approx ( 1.30 min) rises which is considered a unique wonder of this region: the door Muru Aramu a carved stone porch of seven meters wide and seven tall.

Locals say it is the entrance to the ” Temple of Illumination of the Viracocha God Meru ” or “Hayu Brand” and tell strange stories about the door , as some evenings becomes semi- transparent hinting a lighted city.

They also say that to play with both hands the inner sides of the door frame and stone resting her head on a slit that is in this , you can perceive strange sensations such as vision of fire, musical melodies and even the vision of tunnels traversing the mountain.

Although the hundreds of people who have tried to perceive these phenomena , only a few managed to notice some of the sensations described above. The natives consider the place called ” Aramu Muru ” like a door itself, and man as the key, which can pass through it when it comes in line with the sun.

The tour will last approximately 6 hours